Gratitude and Sorrow on the Way to Burning Man

Many of you reading this may have been following the adventures of my trip across the country to Burning Man with my brother, Chris Jeffries and his trusty dog, Homer. It's a trip we were repeating from 2009, this time with the addition of a friend, Farhad Rezaei, and a new dog: Max, the standard poodle.

I've not posted for several days because of a catastrophe that unfolded, affecting us all profoundly, but none more than my brother. 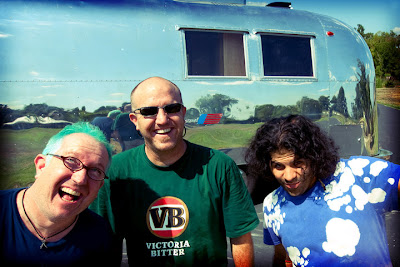 It is with great sorrow that I share this: Thursday afternoon, a scant handful of hours after standing at the foot of Mount Rushmore in the crisp morning air, we experienced the unthinkable: a catastrophic, terrifying highway accident, resulting in the total loss of both Airstream "Marge" and "Edna," the mighty towing Ford Explorer.

And it is with profound gratitude that I tell you: We all climbed out of the twisted and rolled wreckage miraculously unscathed, utterly OK in body. This cannot be overstated: Three humans and two dogs, all lucky to be not just alive, but almost completely unscathed, save for a (very) few scrapes and bruises.

We spent 4-5 hours (not really sure) on that deserted highway, under the laser-like Wyoming sun, with kind souls who stopped immediately, and waited for nearly an hour for ambulances and police to arrive (that's how in-the-middle-of-nowhere we were). Eventually, EMTs checked us out, and confirmed our miraculous condition (Incidentally, the first witness Chris talked to, minutes after the crash, asked him point blank: "Who's dead?"). Then we spent two hours pulling things out of the wreckage — some of it because of real value… some of it, just to occupy stunned, disbelieving hands.

Eventually, two giant flatbed tow trucks and a dedicated family of race car drivers collected this … ruination … in its myriad shards and drove us nearly an hour to Gillette, Wyoming (pop. 19646), where we limped (not literally — again with the gratitude) into the Clarion Inn. And we've been here since then.

My life since Thursday afternoon has been framed by tears, many tears still, as well as grappling with what happened and what's next and a nearly incomprehensible fugue that might be simply summarized as "Oh, Chris…" — which causes the most tears, even still. Even now.

We're all still attempting to come to grips with this, but we are, first and foremost, grateful — and lucky — to be alive, and unharmed.

On Thursday, after we struggled to just make it to a bed, I had guessed that probably it was "game over" for us and Black Rock City (as the temporary community of 40,000 is known), but apparently not — and after very little discussion on Friday morning, it was agreed that we all need Burning Man more than anyone could have possibly imagined.

And so the work continues, as I said, bracketed regularly by tears. Probably I could speak for us all, but I will only say for me: This has rocked me to my foundations, the memories of the wreck somehow becoming scarier — much scarier — than how it felt during what we've estimated to be the seven seconds.

Arrangements in this small Wyoming town have been incredibly challenging, every single step of the way. The people here are kind and helpful with what they've got. At some point soon, the journey towards Black Rock City will resume — but with all of us, changed forever, I can't doubt.

I don't know if I have the wherewithal to post more photos from the road. I probably do not. But I will attempt to update followers of this journey in the most respectful and meaningful way that I know how — and I pledge to lovingly photograph us — Chris, Farhad & I, at least a little — in Black Rock City, a place so astonishing, so magical, that it's maybe the only place with the potential to help us heal and be, if only for a week.

Thank you for your love and support. Please let us continue to collect ourselves before asking too many questions. We're lucky to be alive and unharmed. That's the best news I can imagine.

In the meantime, please keep us in your thoughts, especially my brother Chris, who has lost not just his work of passion of the last several years, but his home, his office … and his wheels.

NOTE: Those wanting to reach out directly to Chris may do so — with consideration, please — at c h r i s [a t ] h ot fut dot com (remove all the spam-blocking characters and spaces)
Posted by Mick Jeffries at 7:41 PM

Oh, Mick. Thank god, and so sorry for your loss of beloved Marge. Be well, unseen forces are with you. Maybe I'll see you in BRC.

Holy Shit, Mick! I am so sorry to hear this story! My best wishes to all three of you!

Wow. I'm so glad you're all ok. Troy and I had a close-to-catastrophic accident on the road years ago, where we just wanted to hold each other and look at each to make sure we were, indeed, safe. I can only imagine how you all must feel. My heart goes out to you all.

I am glad you are all survivors.

thanks for the love, you all.

today is much brighter, after some magic of healing seemed to pass over us last night.

@tiff glad YOUR ok. I don't like that I'm missing you in BRC, but I understand and send my love.

Love is with you. And care from your Lexington fans and friends. I think I speak for many when I say you are so valued and we are so grateful you and Farhad and Chris were not *physically* hurt. Be gentle...gentle with yourselves. And enjoy your time at Burning Man!

Glad you guys are safe. To nearly lose one's life is sometime's the surest way to find it, but that does not discount the grief that accompanies. So sorry.

You are precious, all of you.

I just read about your near disaster as a feed popped up on FB. Glad to know that all the living creatures survived relatively unharmed. Good luck on the resumption of your journey!