A Night to Remember

A few days ago, Lucy and I put the bedroom window AC in.

It's the sure sign of summer; Neither of us particulary likes AC in general, but we share a love of a frozen, heavily-blanketed, white-noised-out bedroom. Ah, sleep.

The AC has led to some deep slumber of late (despite my chronic sleeplessness).

Last night was a weird one, though, even by my standards. After an action-packed dinner (Dudley's with the Points, and a great variety of Prom attendees, one of whom found a spider in her salad and produced the most amazing wide-eyed expression of panic/lunacy on her face that I've nearly ever seen), a couple of drinks with folks at Atomic Café (the restaurant who's 'you-guys-can't-do-a-damned-thing-for-me' reputation continued to soar when I ordered a Blue Hawaiian, and was asked by our server if I could tell the bartender how to make one; C'mon! This place claims to be a Caribbean restaurant!?! I just don't get it)

After that, Lu and I returned home to turn in, and just as I settled down with The Best American Non-required Reading 2006, it became quite apparent that there is a bat in the room—apparent, due to—you know—the swooping and flying and circling.

Which led to a probably 45-minute ordeal where I did the "Git baat! Out the door, bat! Giiit!" thing, waving assorted things in the air as—you know—a message of "git and good will." Meanwhile, Lucy alternately cowered and slept beneath previously-mentioned massive covers. Finally, summoning nearly every ounce of courage in my possesssion, I smacked a shoe box over Ms. Bat (I had the feeling it was a girl) and stood on a chair with a squealing bat under a shoe box, against the wall of our bedroom, while Lucy went to get me a LP record to slide underneath of it. I was exhausted and defiant at this point, too, leading to exchanges like the following:

Lucy: "I wonder if piece of cardboard would work?"
Mick: (defiant, sulky) "I WANT AN ALBUM."

Finally, she brought me Lily Tomlin. 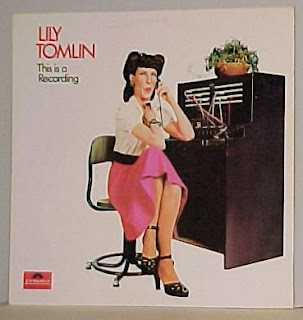 A few squealing minutes later, the bat, the box and Lily Tomlin all made a hasty exit out the upstairs window, followed by the frantic and immediate slamming of the window. If that bat had flown back in, I might have started crying. I assume the box and Lily are in the driveway.

After The Batcave, I returned to my book, Lucy to sleep… done right? Oh, so-not-done. As I said earlier, we had eaten magnanimously and had a reasonable number of cocktails… hours before. And I was, admittedly, not feeling too good. Some kind of mixture of copious amounts of food, some alcohol, and I suppose 47 shotglasses of adrenaline. And lying there, I started to hear that little voice that you hear sometimes that says: "You will feel much better if you throw up, don't you think? Oh, by the way, this isn't a suggestion; it's more of a casual order." Which did come to pass, and I'll leave it at that.

Food poisoning? Too much to drink? What? I don't know. I can't remember the last time I threw up. Dinner was totally delicious (though I did eat too much) and cocktails were a couple. I remain baffled by the barfing. After all that, I went to bed, totally exhausted and dreamt a very weird dream. Which I will tell you about next time.
Posted by Mick Jeffries at 11:30 AM 6 comments:

Today's moment in type ubiquity brought to you by the most famous font in the world: Happy Birthday, Helvetica! Now, you're 50!
Posted by Mick Jeffries at 2:25 PM 3 comments:

Raquy & the Cavemen at Natasha's

Took what turned out to be some neat pictures on Sunday of middle-eastern percussion wunderkind Raquy & The Cavemen, who did a workshop and also a performance with Rakadu Gypsy Dance at Natasha's Cafe, here in Lexington.

Some pictures are here.

I'm so Poi. Much Poi-er than you (TT version), originally uploaded by mrtoastey.

If you're curious about the hoo-hah that was the Rakadu Spirit of the Tribes 7 trip in Hollywood, Florida, I got some pictures for you!

Stumbled across the Cedar Post Restaurant on Hwy 25 this morning in the gloaming.. The gloaming has long been my favorite time of day. Driving Lucy to the Cinci airport (which is in Kentucky, btw), it occurred to me that about 4:30 am in the morning is kind of "the staging hour." It's the minutes before the Big Show. "You mean the Every Day?" Lucy asked. Yep. The Every Day. The Big Show. Same thing. It's easy to think of it as "just another day;" but if you're up before the sun comes up (no small feat), it's somehow much more epic.

Plus, if you've just driven yr. sweetie to the airport, you might then stumble across some total Kountry restaurant and be the only customer, listening to the locals talk about health and home repair. Headed to my table: the house special, the "Sunrise Surprise," which is appropo since that is exactly what's happening outside. There's a lot to be said for a well-timed, well-named meal, methinks. This place is a cabin-like structure, what with the logs and the chinking; it's actually three buildings it seems, the oldest of which is currently a beauty shack. Hand-written on the sign it says "We use Matrix." Which kind of reminds me of the funny thing that less-than-fluent (and often perfectly smart, I must add) people say concerning computer software: "Do you have Microsoft?" or "Can you show me how to use Adobe?" These are all brands, not products, not that anybody's keeping track. Okay, okay, I'm keeping track.

I asked my waitress about the age of the building. "This building must be pretty old, right?" I inquired, looking around at the Daniel Booneness of it all. She smiled proudly and concurred: "Oh yeah—I would say this place is at least 20 years old."

.............Right. Well, I guess there's something said about imitation being the sincerest form of flattery—I'm sure Daniel Boone would have slept here…Had he been born a lot later..
Posted by Mick Jeffries at 2:10 PM 2 comments:

Curse the Fern bar. Thumbs down to the Sports Bar. Way down. At what point in the history of public drinking establishments did it become necessary for there to be a multitude of blaring televisions? I do not care for it, friends. TV is the opiate of the masses, not liquor, not even opium. TV, friends—TV.

And I have to admit: Al's Bar—deep in the hood in downtown Lexington—does have one TV. Annie, the barkeep gets rather absorbed in Days of Our Lives. And that'll do. Beats the hell out of CNN or ESPN, okay?

The point of this post (in case you thought there wasn't one) is salutation in fact. Particularly, to the new owners of Al's Bar. I had heard recently that a handful of intrepid young dudes had bought Al's, and I was intrigued and simultaneously concerned for their safety. Al's Bar is no TGI Fridays. In fact, at 6th and Limestone, I've tended to drive by and comment to whomever was with me "That is a good place to get your ass kicked." Suffice it to say: Al's Bar is no TGI Fridays.

I'm happy to report that my assessment may have been out of order. That's because this sunny afternoon, I rode my bike over for a cheeseburger on the advice of intrepid radio pal Prof. Griff. What I found was something that I thought had nearly completely dried up—an honest-to-goodness dive bar. A Bar Bar. If you can picture Moe's Tavern in The Simpsons, then you're on the right track. I knew I was.

Tilty pooltable, C&W/Ranchero jukebox. Dismal bathrooms. Plenty of tables and chairs (to qualify for Sunday liquor sales). Josh, the kind and cool new owner is a hip younger dude. He's into healthy stuff, is embarrassed about the bathrooms and promises that the burgers-and-fries menu is going to get an upgrade, all of which is fine; I can suffer some organic produce dishes for the right to sit on a dingy bar stool and rock CCR on the jukebox in near-darkness whilest watching for assorted characters to come in and cool their heels. (Sample conversation snippet: [guy walks in] Bartender: "Leroy! Good afternoon! You want a shot of J&B?" Leroy [laughing]: "Naw, naw…it's too early…just give me…[concentrated pause]…um…well, Hell, why don't I just have a shot of J&B?" He drinks up and hits the door.) Done and done.

I didn't actually have a drink today, but the cheeseburger and tater tots were vintage and made with love. I'll be back for the cocktail, no doubt. If you're in Lexington or nearby, check it out.
Posted by Mick Jeffries at 5:09 PM 3 comments:

I've got a super-special friend named Alyssum. She may be your friend, too, and if she's not, it's probably only because you've just not met. She's friendly like that, and funny and smart and double-plus talented; for instance, she's an astounding and multi-faceted dancer and also a veterinary student who has stuck her arm up cow's butts.

Here's the thing though—her apartment burned. She lost her sweet kitties (so sad) and many many things. Fortunately, she and her roommate were not at home and are fine.

Fire, jeez—it's just one of those things that you hope hope hope stays out of your life. If you want to help Alyssum out, there's a number of things you can do:


Here's a few pictures I've taken of Alyssum. One of my favorite Alyssum moments was an overheard comment by her moments before a contortion performance in Lexington: "Okay, you guys will carry me out and unfold me…"

Help her out if you can. And check those smoke alarms.
Posted by Mick Jeffries at 6:08 PM No comments: