always have, always will. I've just always built models of spaceships, and worshipped astronauts.
Posted by Mick Jeffries at 8:29 PM No comments:

Kaydence through the looking glass 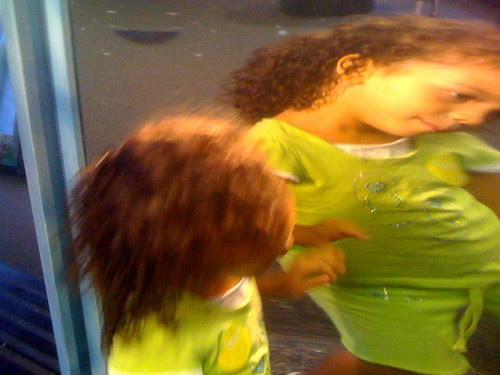 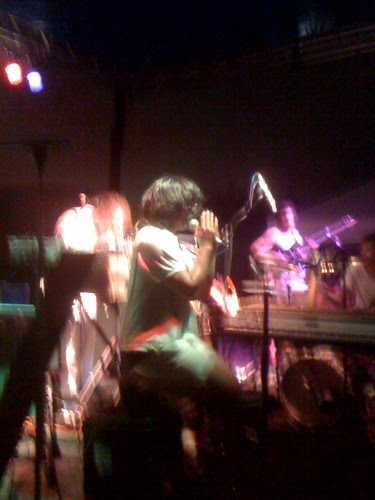 Requiem for a Little Kitty

Today was kind of strange with some wonderful and some sad. This is about the sad, because Sad matters, too.

I was renting a car for a whirlwind trip to Atlanta. Since I was getting it from the Lex airport. Lucy dropped me off there, and upon checking in I found an odd thing: They had a kitty in a banana box. I peered over the counter at the box as they told me that a woman had returned a car, complaining that it was "meowing." Inspecting the car, they extracted a golden-haired 4-week-old kitty from inside the wheel well barrier. It somehow had climbed up in there and was quite completely trapped. And now they had it in a box.

I went behind the counter, without even asking, and investigated. The first thing I saw was a kitty face trying madly to push its way through a two inch ventilation hole. I kind of fell in love instantly. It reminded me greatly of my own kitty dearest Olive and how she used to like to do this.

I opened the box, and with some forewarning, found this fluffy kitty, who was very energetic but who's "back end" was in shocking shape.. looking like it was either missing altogether or just caked and matted with feces. It was an alarming sight, and the crew at the rental counter weren't ignorant of it. One girl said that she was going to have her boyfriend adopt it and they were going to take it to the vet, of course. She was very sweet. But there was a tentativeness that made me dial Lucy immediately and summon her back.

Lucy came back — we've been vaguely looking for a kitty to fill the void left last year by the great Black Betty — and together we assessed the situation with an emergency call to dear Alyssum. Finally, with much convincing from me, Lucy agreed to take the kitty — box and all — and Alyssum would come consult in a couple of hours, after work. I felt certain that kitty was capable of making a full recover, with our love, and would grow into a magnificent feline friend.

And so, I got in my rental car and headed for Atlanta, increasingly late for an appointment.

The next couple of hours were dramatic, and I feel very bad for not being there.

Lucy and I talked several times on the phone and I heard deep and mounting concern in her voice for the well-being of the kitty. Later, I got a txt saying that she and Alyssum were taking the kitty to the vet emergency room.

A little later, Lucy called and told me that after a very short vet visit, the kitty was put to sleep, her ailments being beyond critical. (I'll spare the details)

Little Furry Golden Kitty made her (his?) way into my heart somehow in just an instant. LFGK was energetic and repeately escaped the box and ventured forth in the few minutes that I spent with her. I was sure that her ills were correctable, but I was very wrong.

I feel bad that I left, leaving my wife and a friend with a kitty that would be put to sleep within hours of my first laying eyes on her.

I don't suppose I'd change anything, though. I'm happy that Lucy loved the kitty, too, if only for a few hours and that she took care of it in its final hours.

I only knew the Little Furry Golden Kitty for about 45 minutes. Lucy knew LFGK for several hours.

Sometimes things don't work out. Some kitties weren't meant for this world.

Mecca amazes once again by pulling an extimated 3,000 people into downtown Lexington for the usually-tepid Thursday Night Live event. They were asked — two days in advance — to stage a revival of the popular five-years-running Thriller Dance which has become a Lexington Halloween staple — and may in fact be the first of its kind, in what became a popular trend around the world (unconfirmed, but highly suspected by many).

Mecca demonstrates, once again, that art and performance can enthrall and unite our community, bringing people together and creating lasting memories and wonder for everybody. For free.

It's about a thriving arts community, and nobody —I repeat, nobody — does what Mecca Live Studio does for Lexington. Remember that the next time you feel generous because as often as not Mecca does these things for little or no cash, in spite of paying rent for their studio space and associated expenses, money they fork out teaching people and our community how to shine.

Remember that the next time you think this town is pretty cool.

Heck, why don't you use Paypal now to send Mecca money to info@meccadance.com?