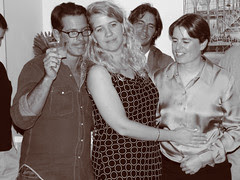 Here are my pictures from Susan & Karen's Wedding, in Provincetown, on Cape Cod. Words can barely do the occasion justice, so I'm trying 170 photos instead. I hope you'll comment, name people (I am woefully ill-informed about many people's names, sorry!) and generally enjoy reliving Susan & Karen's wedding.

NOTE: I decided to put the pix on flickr.com because it's a more "social" site. However—flickr isn't geared towards ordering prints. With that in mind, I've ALSO posted the pictures—no commentary, and less comment options—on the print-oriented site, Kodak Gallery, where you can easily order prints of shots you want. NOTE: you will have to create an account to order prints, I beleive. To order prints (remember—FIRST go to Flickr to see the pictures, and to comment and see other people's comments), click here.

And if you have any questions, leave a comment below or email me directly.

thinking about the wedding. 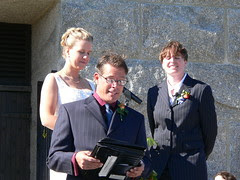 Headed back from a wonderful—more wonderful by far than I previously imagined—trip to Cape Cod.

The Wedding of Susan and Karen, I will always have for my own, I feel. Yesterday, at the post-wedding day brunch (where I ate a sumptuous—though dubious—"South Beach"-friendly breakfast of barbecue, fruit, and bacon), Karen—as gracious as hosts come—shoved her own certain fatigue aside and patrolled the house contantly with a smile and a hug saying: "How are you? Can I get you anything?" Karen manages affability as a science and warmth as a craft. Which is a silly way of saying that she's a very special and friendly person. And Susan, I already knew I liked Susan. The other day, she said that we must have been "separated at birth" because we are contantly finding similar ideosyncracies, the sum of which has irreversibly led to our friendship. (Starting immediatley upon meeting, when we agreed that, not only did we not like Goat cheese, but we had both had people frequently disbelieve us and say 'Oh, you just haven't had good goat cheese.' People! Don't like it! Have tried it plenty!) So I'm always happy to see Sue. And to see Sue happy—tearfully happy—well, it was quite contagious for many people there in Provincetown.

I could say "the wedding was beautiful," and that would certainly be true. It was visually one of the most beautiful weddings I've ever seen, at the base of the Pilgrim Monument (surely a sign of tolerance), under streaming Autumn sunlight, amid a riot of flowers and a clutch of friends and family.

But it was more than beautiful.

It was so deeply meaningful and touching. It's hard not to become strident, (though to their credit, they didn't) or to preach (which they also didn't), but I want to say this: I don't know how anybody could spend any time with these two women and not wish for two people who love each other to be happy and be married. If there are such people, —and according to the newspapers, there are—what a colossal waste of energy. Anyone who even bothers to take the time to disapprove of gay people getting married ought to try making a more productive contribution to society. See, here I go getting strident. And I don't want to. Because, even though it was about that, it wasn't about that. It was about two people who love each other getting married and celebrating their love. It was about a bunch of their frends coming to witness that and wish them well.

And a lot of those friends are my friends now. And isn't it always nice to have a new friend? I think it is.
Posted by Mick Jeffries at 8:30 AM 1 comment:

from up high, too from up high, too
Originally uploaded by mrtoastey.
P-town from the top of the Pilgrim Monument, a spectacular, concentric circle hike up up up to the top of the sky. the Fast Ferry comes into the piers regularly... when my ferry sailed in, on of the Greenpeace ships was docked. It was surprisingly moving to see this sight; a huge ship in the service of defending environmental rights against assorted corporate interests, sometimes with their very lives, as Greenpeace workers know too well. Having read about Greenpeace ships having been actually attacked on the open sea, I found it unexpectedly moving to see this ship. I didn't manage to get back to the pier for a tour. Another "next time" event.
Posted by Mick Jeffries at 1:57 PM No comments: 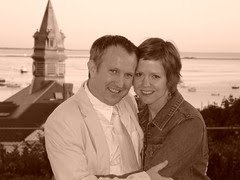 from up high
Originally uploaded by mrtoastey.
didn't get to see any whales or dead pilgrims, but that's for next time. we're coming back... so many reasons… one of them is the rails to trails path which runs all the way up the cape.. this could be a future Very Long Bike ride... imagine: accomodations in p-town, and a long bike ride to get there up the cape on a no-cars bike path. that sounds like a plan.
Posted by Mick Jeffries at 1:50 PM 3 comments:

Andy has a brainstorm 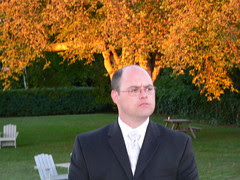 Andy has a brainstorm
Originally uploaded by mrtoastey.
Nobody wears a dusk tree like Andy. The wedding was on top of p-town at the Pilgrim Monument, offering a panoramic view of p-town and some fabulous evening light.

today, lucy and I have been venturing back across the Cape, slowly making it back to Boston, the plane(s) and "the real world." But on the way we've seen seals, the Marconi monument to the first transatlantic radio broadcast (from the US, that is), much marshland, and lucy has found some special rocks.
Posted by Mick Jeffries at 1:45 PM No comments:

"i love the flower girl" 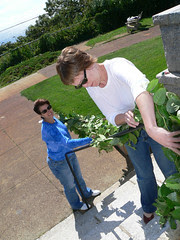 "i love the flower girl"
Originally uploaded by mrtoastey.
That's a quote from the Edison Lighthouse song, which I also love. There are lighthouses here on cape cod. what a wonderful thing. Lucy, with help from Chris makes the flowers happen for Susan and Karen's wedding. They were so wonderful, that Christian, the big-city wedding planner marveled upon finding out that Lucy was NOT a professional wedding florist. Hear that, Lucy? Good work, grr-frien'...
Posted by Mick Jeffries at 9:25 AM No comments: 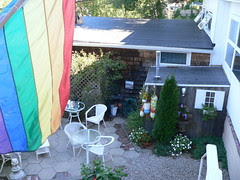 The Dunes
Originally uploaded by mrtoastey.
I love Provincetown. It is officially one of my favorite places. It took me a bit to admit this, because of my typical need to see the crassness of many destinations. But Provincetown won me over quick. The delight of a place where so many people can feel at ease about who they are on the inside is a wonder. Couple that with some of the most beautiful coastline, and not a MacDonalds to be seen anywhere, and what's not to like. Bikes, dykes, and what's not to likes? (okay that was dumb)
Posted by Mick Jeffries at 9:21 AM No comments: 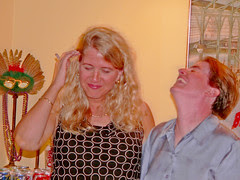 Susan and karen
Originally uploaded by mrtoastey.
Many more pictures to come.

We're delighting in Cape Cod. We've rented a tandem bike, and biked the National Seashore, through the most glorious dunes, we've walked the wonderful streets of p-town, we've been blessed enough to take part in a beautiful and important same-sex wedding of two wonderful people. I'm extra happy to be alive today.
Posted by Mick Jeffries at 9:18 AM No comments:

a morning in P-Town

It is lovely here. not just the surroundings, but the general demeanor. it's hard not to be happy among the sea-blasted woodiness of cape cod and the streaming morning sun as it beams down on cranberrry bushes and marigolds. Did I mention that it's beautiful?

There's a joy in the air, or I'm imagining things.

The rainbow is the favorite color of p-town and I'm glad. People are fabulously happy here. Not "leave us alone we're on vacation privately" happy, but "hey how are you we're on vacation, too" happy. Right now a group of nearly a dozen walks down the shoulder, headed off to the diminishing tip of the horn of the Cape. I just realized that mostly I'm seeing adults, although there are kids here, too.

The only sadness was waking up in our tiny charming room at The Dunes and having Lucy be gone, off to work on the flowers for Susan and Karen's wedding, today at 2:30. Last night was the rehearsal dinner, but really more of a friends party, a family party, a gathering of loved ones. And listening to Susan and Karen each speak about how happy it made them for us to come here for their wedding and how happy it made them to get married made me wonder why on earth anyone would wish ill on anybody of any color or any gender or any disposition, who wanted—really wanted—to marry somebody else. It's an act of the most profound and genuine love, from where I sit here this morning—on a deck, with the breeze whipping around flags of the US, Canada, Portugal and the nation of those who are different, the rainbow flag, symbolizing, almost certainly better than any of the others, the union of "all the colors of the rainbow." This morning I defer to that flag more than ever before.
Posted by Mick Jeffries at 9:56 AM 1 comment:

Here I am sitting at the seaport in boston waiting for my ship to come in. Okay, it's already here and it's not a ship. It's a ferry to Provincetown. But I am waiting for a shrimp cocktail, if that counts. It's sea-related, right? Right.

Flyiing into boston harbor, we passed over this outcropping of rocks with an old lighthouse on it. the kind of thing you'd see in—I don't know—a movie trying to establish it's eastern seaboardness. It was one of those almost fictional sights, that isn't fiction. It could have been abandoned, though.. There was something so staged looking. I guess it's similar to the Dust-Blowed Desert Gas Station; these are things that a Kentucky native kind of only sees on TV.

Well, I didn't mention—I'm going to a lesbian wedding in Provincetown, Mass. To get there, I drove to Louisville, flew to NY, flew to Boston, took the water taxi to the seaport, and now I'll take the Fast Ferry to P-Town. This definitely fills my recommended daily allowance of unusual transportation options. which always a plus, as far as i'm concerned. I love traveling.
Posted by Mick Jeffries at 4:35 PM No comments:

In shallow guilt over the lack of a blog post in a little while, I offer Black Metal for Dummies, an explanation of the look behind all your favorite drano-voiced goth crunchers.
Posted by Mick Jeffries at 9:45 PM No comments:

The wonderful James Shambhu—who's such a friend of mine that I call him Jim—has been hard at work and is displaying new work at New Editions Gallery in Lexington. In addition to his distinctive style and vibrant colors, you'll find fascinating titles like:

"She looked at him with a blank stare. Then suddenly the gravity of the situation hit her.

She sat down quietly."

Posted by Mick Jeffries at 12:40 PM No comments: 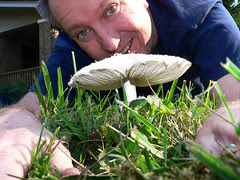 Mushroom Tuesday Portrait
Originally uploaded by mrtoastey.
Click on the picture to read the story of The Tuesday Mushroom.
Posted by Mick Jeffries at 11:05 AM No comments: