Posted by Mick Jeffries at 8:48 AM No comments:

It seems that today I'm intentionally shopping for things that taste alarming.

Posted by Mick Jeffries at 10:19 PM No comments:

On the June 17 show, I was lucky enough to be the first "waking hours" deejay to broadcast at WRFL's new full power of 7900 watts. Ten years in the making, the power upgrade was easilysuch a big deal that I had to get station founder Kakie Urch on the phone immediately to discuss what is probably the station's best news since going on the air in 1988.
Here's our chat, along with my guest Amberly Warnke of WRFL's "Ages 3 & Up" program and PRX's Pied Piper Radio.
The clip is about 11 minutes of conversation, and included is Big Audio Dynamite's "C'mon Every Beatbox" — the 1st song that WRFL played upon signing onto the airwaves over 20 years ago. It seemed only appropriate to play it again, as our signal extends, for the first time, far beyond Lexington.
Listen Here!
Posted by Mick Jeffries at 9:32 AM No comments:

Robbert Bobbert and The Bubble Machine "We R Super Heroes"

What's not to love about Robert Schneider? If you can't think of anything, here's another thing to not add to the list.
Posted by Mick Jeffries at 8:57 AM No comments:

On Trivial Thursdays, I was lucky enough to be the first "waking hours" deejay to broadcast at WRFL's new full power of 7900 watts. Ten years in the making, the power upgrade was easily such a big deal that I had to get station founder Kakie Urch on the phone immediately to discuss what is probably the station's best news since going on the air in 1988.
Here's our chat, along with my guest Amberly Warnke of WRFL's "Ages 3 & Up" program and PRX's Pied Piper Radio.
It's about 11 minutes of conversation, and included is Big Audio Dynamite's "C'mon Every Beatbox" — the 1st song that WRFL played upon signing onto the airwaves over 20 years ago. It seemed only appropriate to play it again, as our signal extends, for the first time, far beyond Lexington.
Posted by Mick Jeffries at 1:47 PM No comments: 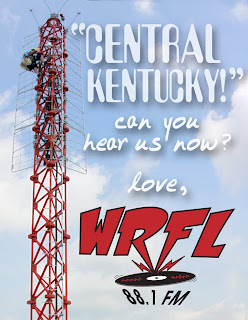 Today is a very special day for WRFL-FM, the University of Kentucky's volunteer-operated "alternative" radio station. It is, in total fact, the most important day since the day the station went on the air.
That's because — after ten years of paperwork, construction, fundraising, and certifications — today the station's signal was boosted from 250 watts to 7900 watts. With the full support of the FCC.
I learned of it this morning at 5:30am, after reading an email from WRFL's implacable Faculty Advisor, John Clark:

Hi, RFLiens. Shortly after midnight, at 12:10:58, to be precise, with little fanfare, but lots of love, [Program Director] Matt Gibson and I applied our digits to the proper places on the transmitter touchscreen. Then we stood back in silence and awe (well, maybe one of us shouted Holy Shit!) and watched the digital readout climb. Without even beginning to name names, many thanks to everyone who had anything to do with this awesome event, all the way back to 1996, when we first started working on it.

After that, I got to spend my show as the first "waking day" deejay to share this news with listeners. What a joy. Pondering it myself, I've been overcome repeatedly with joyful little tears.

Maybe I'm just glad we're both still alive, WRFL & I.
And while I did help start the station, I didn't expect it to be the beacon that it is in my life, decades after those outlandish college times — and years after leaving to "get on with my life."
1987 — 1st General Manager Scott Ferguson
inspects the station's original tower. Photo by Jack Smith
Nor did I expect for Life to bring me back to Lexington, or for a young friend named Ross Compton — who knew I'd been involved in "the early days" of the station — to arrange a shift for me, should I want one. It hadn't occurred to me, but I was flattered. At the time, my life seemed in terrible flux, and the idea of playing a little music on the radio seemed like a welcome diversion from the daily challenge of living alone with my struggling teenage daughter.
Flash forward eight years and here I am: Thursdays, 6 - 9 am
My daughter got her shit together, and so did I. Sometimes, I've flogged myself, thinking I must be a loser because I still do a radio show at a station I helped start in the late 80's. Ironically, it could be that being on the radio is the only thing that hasn't changed for me. Even my show — a genial "morning zoo" thing called Trivial Thursdays — I jokingly call "the show I never would have allowed anybody to do" when I was WRFL's 2nd Program Director.

More than just error-prone volunteers playing music nobody's ever heard of, WRFL really is a beacon. Over and over, I've seen it speak to people who need it for one reason or another. Within those graffiti- and sticker-laden walls, some of those people have become
May 2010 — Visiting the new tower and antenna with Kakie Urch (WRFL original of originals) and 1st General Manager Scott Ferguson. Photo by Brian Connors-Manke
my dear friends, and some of those people were not even born in 1986-7, when a handful of bright misfits (who were very similar to some of my young friends today) were trying to figure out how you start a radio station.
And that must be where the emotion comes from for me.
Because how could I feel anything but profound gratitude for this station — and my good fortune to be so involved in its existence — when it's still nurturing me 25 years later?
Today's power upgrade will deliver the sounds of 60+ volunteer deejays to far more ears than yesterday. Previously limited to Lexington, we'll now reach west beyond Frankfort. South past Nicholasville. And north towards Cincinnati. And into the country — to places with names like Stamping Ground and Waddy. And Peytona, of course.
And that riot of sounds travelling at 88.1 megahertz will matter to some of those who hear it. Those sounds will matter in a way that says something like: "Maybe it's okay to be weird or a little different. Listen to that radio station — do those people sound normal?"
And in some strange way, this notion will give some souls the permission they need to do the wonderful things that they are meant to do.
How could I ask to be involved in anything better than that?
• • •
This reflection is entirely dedicated to my friend and regular inspiration, the inestimable Kakie Urch, a force of nature without whom so many of us wouldn't be talking or even know each other — to say nothing of listening to this beloved radio station.
Posted by Mick Jeffries at 2:00 PM 5 comments:

Homemade rhubarb syrup. (pulp in the background). "What's it for, what's it for?" Just have to wait and see!

Doing the cocktail thing tonight at Gumbo Ya Ya's with Mecca bellydance! How it that ever a bad time? (pictured: homemade tonic syrup, and a byproduct — cinchona bark "silt." Prepare for the rare and odd twang of gin & tonics with HOMEMADE tonic water!)

Posted by Mick Jeffries at 10:11 AM No comments:

I never saw it, but apparently my old friend Forrest Payne had a business card that categorized him as "general good guy." I 'd like to politely suggest "exceptional" as more appropriate, at this particular time.
Forrest — as unique of a character as I have ever known — died on Monday, after a year's battle with a particularly savage brain cancer.
He was so weird — yes, that's the word — that I wouldn't have been entirely surprised if he had lived on far beyond his 44 years just by casually sidestepping "the whole cancer thing."
But he didn't.
In the many years that we spent as close friends, his natural talent for Being always captivated me — He was a master photographer, a gifted improvisational musician and songwriter, a smirking impromptu soothsayer, and a liver of Life with a capital "L."

We shared a high school darkroom in Owensboro, a house in Lexington, and a blue million adventures and insights in between, a span of something like 20 years.

From the beginning of our friendship, one of the things that I liked about Forrest was that he didn't hesitate to adventure, and he would do things not because they were crazy, but because they were not. Like climbing water towers at night (or at all), or exploring caves with a disposable lighter for illumination. What I understood from our adventures was (because it was largely unspoken): 'Never mind those alarmist 'normal' people who say this is dangerous or bad or illegal. This is an important adventure, we're not harming anybody or anything, and we'll be careful.'
And those things were all true — and still are.

With Forrest, I felt my confidence for such things emboldened because he was so casual about them. These things needed to be done, because they were there. Because now was Now and why not, anyway? I can still see this gleam in his eye upon confronting, say, the unintentionally-unlocked door to a commercial rooftop. And he might look at me with that gleam as if to say: "Should we? Of course we should."
And we did. He did. Over and over. It was his way.
Forrest is one of several remarkable people that I am grateful to call friends who hail from the vicinity of Owensboro, Ky. And a long time ago in Owensboro, Forrest was called "Bryan" and we shared a darkroom at Daviess County High School. We weren't close then — not yet— but we were friends; first in photography, and then later in off-beat "smart" music like XTC and The Cure and Talking Heads. And these were two of the main things that seemed to be saving me from the smothering droning death of high school.

That darkroom was a sanctuary, and we both knew it, but it probably went unsaid. In that darkroom, we didn't have to answer to anybody, except maybe Tom Grimsley, an exceedingly cool art/photography teacher who I know was a powerful influence on Forrest. (I liked him, too, because he was cool with me despite never having been my teacher)
I know that's when I started to become the person I am, in fact — because I could think in there. I could think about a single frame of Kodak Tri-X Pan film wedged in an enlarger, and I could think about the music that was ringing in the darkness, from a jam box — something that few other students could get away with during the school day.
That was Owensboro, that was high school. I'll continue another time in Lexington — where Bryan became Forrest — and a dear friend.
• • •
For More: If you're reading this at my blog, Mingle Freely, please visit IKnewForrest.com for the recollections of many others who loved him in their own ways.
Posted by Mick Jeffries at 7:59 PM 7 comments: