The Falls of the Ohio 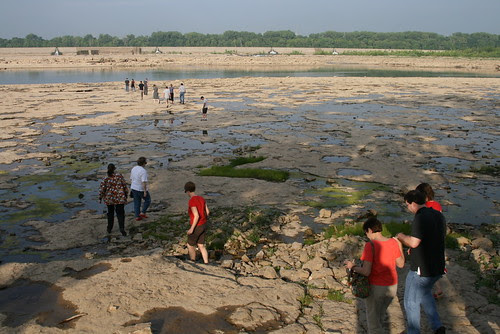 The Falls of the Ohio, originally uploaded by mrtoastey.

On a clear and beautiful Tuesday morning, a group of us visited The Falls of the Ohio—one of Jamie's favorite places—to scatter some of his ashes. It was a very emotional time and I took special care to only document it in the most general of ways. I just wanted to share with those who love Jamie what it looked like there. The earth that we walked across is filled with remnants of creatures and adventures impossibly past. And to those magnificent epic tales, we added Jamie. I'm sure he would be happy about that.

More words and photos about Jamie are here.

Posted by Mick Jeffries at 12:22 PM No comments: 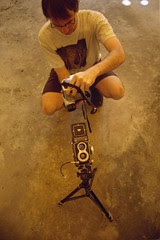 Feeling kind of dreamy at 4am, though not from actual dreaming. I woke up with a toothache and got the opportunity to quietly walk the empty halls of the Galt House, thinking about how it's okay that Jamie's gone. Yesterday—Jamie's Day—comingled my life with the lives of so many other people who shared and delighted in him on this Earth. And it was hard to let him go, but it was very comforting and rich to walk into their worlds, beside them.

There was an underlying joy and a camraderie in his service, and in the simple hugs and shared faces, so many of them etched with sorrow—I felt like I got to look deep into the good souls of so many people who felt like I did; that we missed and loved Jamie, but that paradoxically, he was the one who had brought us together.

Walking the empty halls of this hotel, I found my way to a beautiful grand piano, with a throbbing lower register, thought of Jamie, thought of the sublime visitation playing of Rachel, and managed to pick out Brian Eno's "Another Green World," a timeless melody which has been ever-present in my ears ever since we … started saying goodbye. That pensive melody, to me, is one of complete and perfect reflection. It is the soundtrack of the mindful observer, it is the soundtrack of Jamie. It is not sad, though it strokes my sadness gently, comfortingly. Like you stroke a sleeping cat.

I'm still sad, as I've said before, because—selfishly—I miss Jamie. I can't believe he's gone. And I've bristled at those words maybe in the past because that don't seem to … really communicate anything. I've heard people say them before when there's been death in their lives. But I know them first hand now and I, too, find myself saying them: I can't believe he's gone. I'm grateful for Jamie's day, as full of tears as it was, it was also full of smiles, full of life and joy, and full of new and old friends. I'm grateful for the service and to the community process of mourning that made yesterday simultaneously so hard and so comforting.

We sleep in the mornings,
We dream of a ship that sails away,
A thousand miles away.

"The Spider and I"
Brian Eno
Miss you, Jamer.

Posted by Mick Jeffries at 4:04 AM No comments:

Going back to the Pilgrimages of Jamie, into the Cornwall countryside, to see sacred stones like Men an Tol
Posted by Mick Jeffries at 7:21 AM No comments:

—"Graceland" by Paul Simon
Posted by Mick Jeffries at 3:04 PM No comments:

I want to share a recollection that was shared with me by Mary Houlihan, something that we fondly recalled the other day—It's not so much a story as it is a state of mind, a snapshot in time.

Mary was dating Forrest, and at the time, Forrest and Jamie were frequent musical collaborators. This must have been around 1998. Jamie lived in Butchertown in the funny little shotgun place that one day just burned the fuck down. (Fortunately, nobody was home)

Anyway, because of music and friendship, we would all hang out together, mostly in Lexington, because mine and Forrest's house was "practice-space-central." for "the boys," as Mary sometimes called them — Jamie, Fo, RScotPayne..

Around this time, I became aware of Rachel's. Songs for Egon Schiele came to me by way of Forrest, who almost certainly got it from Jamie. It was and remains one of the most haunting and introspective pieces of music—of any genre—in my library.

Eventually, the opportunity — through Jamie, of course— presented itself to go to see Rachel's in the Ville. I'm not really sure where the show was. It was like a college auditorium. Going to the show was an eye-opening experience for both me and Mary; to see this Louisvlle scene, to see these musicians who had street cred for playing in some pretty loud bands on stage in a scholastic auditorium playing… cellos and violas. Opening the show was maybe the first "math-rock" sort of band I'd ever seen, Dianogah. For somebody used to seeing bar bands, it was like landing on another planet. Not just musically either—The audience was attentive and supportive, with Jason Noble, during some technical difficulty asking: "Anybody know any jokes?" and then proceeding to tell some terrible ones himself. The audience was also full of loving hecklers, people you just knew were friends of the musicians, saying things like "Why don't you play a little quieter?" to scattered cackling. Many of these were Jamie's "Louisvlle friends," I say as a Lexingtonian, and I saw for the first time that Jamie didn't just have other friends, but that he himself was known and moved in much wider circles. Heck, I had to acknowledge, Jamie was kind of famous, I felt like, and I was there with him. It was a good feeling.

Another time, maybe the same weekend, Jamie took Forrest, Mary and I to the legendary Sugar Doe Cafe, to see David Grubbs and and some major dude who had something to do with Tony Conrad, the minimalist giant (though I knew none of this particularly at the time). I stuck close to Jamie, a little uneasy awash in this sea of ideosyncratic arty strangers, many of whom greeted Jamie by name. And as we pushed our way back into the performance space in the back, I was in awe of what I saw, to this day: A room full of people, mostly younger than me, sitting quietly on the floor, in rapt attention, listening to David play some of the most atonal introspective "music," I'd ever heard.

It wasn't just the music. It was the whole scene. Why weren't these "rock kids" drunk? bored? talking amoungst themselves? I was in awe of it. Again, it was like another planet. The Planet Louisville. The Planet Jamie. And it opened a myriad of doors for me into musical worlds not yet explored. Jamie was always doing that for me.

The next day, we returned to the Sugar Doe for a fantastic brunch (unearthly music at night? amazing brunch the next day? what is this place?!) and Jamie seemed to know everybody. He was always greeted warmly and again, I was his friend. I felt special.

Mary and I recalled this story with great fondness the other day. We both had no idea what we were getting into, but in somewhat different ways: she was a self-described "bar-band girl," and I thought myself to be a a wise, well-informed alt-music snob. But Jamie had a way of showing me how little I knew. Without the least bit of hipper-than-thou, Jamie was just showing—and sharing—his interests, his curiosities… and leaving the conclusions to you.

I try to practice this in my life, too, but I never realized how much of that attitude I learned from Jamie.

(shared from The Jamer Way, a photo and recollection blog)

Posted by Mick Jeffries at 1:37 PM No comments:

My friend Todd blogged a little bit about jamie, too.
Posted by Mick Jeffries at 11:28 AM No comments:

Jamie, I miss you. 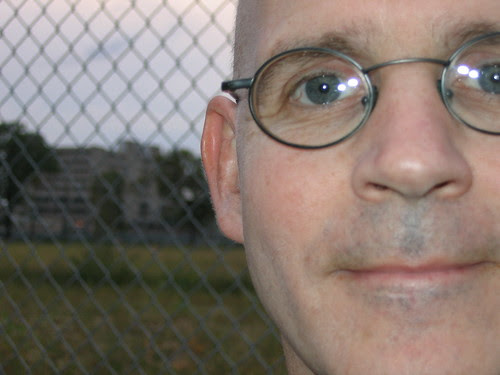 My good friend, beloved amigo, brainiac, humorist, and bon vivant Jamie Tittle passed away yesterday, Tuesday, June 19, 2007. At about 8:30pm, Jamie rocketed via Incomprehensible Quantum Dimensional Express to his next infinity-based adventure. He left inside a beautiful sunset from his hometown of Louisville, Kentucky.

I miss him so much already; but I know that he'll find ways to tell me more about myself and about this marvelous universe that we call home for however long our time here happens to be. Jamie's seemed short. He was 41, I think. It's easy to think that his tour wasn't long enough, but I try not to think that. The truth is, I like a world with Jamie in it. It's selfish, of course. I just miss him and I'm sad. Maybe you knew Jamie, if you met him for a minute you probably liked him. He was so very likeable. He was also a genius, but never tried to make you feel dumb.

Jamie was — and is and will always be — one of my favorite explorers, equally comfortable rubbing shoulders with computer wizards (and matching their wizardry) or lazily riding bikes in whichever direction suited.

Jamie, man, you will be so very missed. Thank you for all the things, places, sentiments, knowledge, and people that you shared with me.

Here are pictures of Jamie. It's a group photo pool and I would encourage anyone who as pictures to please share them. Looking at these pictures is a kind of solace that I didn't expect to be so powerful.

Also, so much love must go out to Jamie's parents, his brother Kirk, his sweetheart Merrill, all of whom help shepherd Jamie to this "connection flight" and helped the rest of us invaluably by maintaining his caringbridge site. Go there. Read the guestbook. Share yourself with the people that shared Jamie's fight with the many many people who cared. And speaking of fights— Jamie didn't lose. Jamie couldn't lose. The guy was so full of light and energy that there's no such thing as losing. And knowing Jamie—just knowing Jamie—that has been a victory in my life.

To learn more about Jamie, read these words and look at these pictures. And share your stories, please at both sites.
Posted by Mick Jeffries at 1:00 PM No comments:

This week on the June 14 edition of my weekly radio show, Trivial Thursdays, which features a different guest every week, and all sorts of non-sequitur chit-chat loosely based on the trivia of the particular day (whew-- major run-on):

Join us for a return appearance by beloved writer and Merry Prankster Ed McClanahan and celebrated photographer/filmmaker Guy Mendes.

Ed and Guy will no doubt regale us with more wacky storytelling, this time drawing from Ed's book Famous People I Have Known, along with appropriate musical flirtations. Also there will doubtless be further ruminations on Carlos Toadvine (a.k.a. Little Enis) and strange underground radio phenom, Cowboy Steve. Expect tallness of tales. You can either listen live on WRFL 88.1 in Lexington from 7-9am, or you can listen online.
Posted by Mick Jeffries at 11:07 AM 2 comments: