Mick Jeffries just shared an Instagram photo with you:

Thanks,
The Instagram Team
Posted by Mick Jeffries at 3:26 PM No comments:

Mick Jeffries just shared an Instagram photo with you:

Thanks,
The Instagram Team
Posted by Mick Jeffries at 2:43 PM No comments:

The Spirit of The Man Prevails 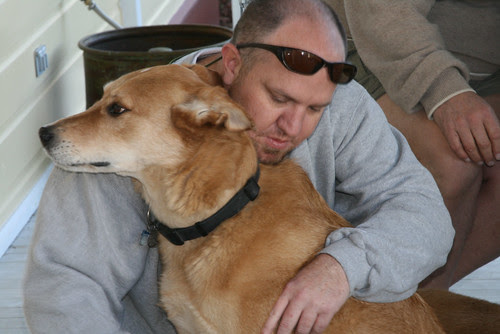 chris and homer, a photo by mrtoastey on Flickr.

Homer's gone and he deserves a moment.

Such a special boy. Homer was my brother Chris's companion for 13-some-odd years. I was never in his presence that some stranger didn't come up and say: "what kind of dog is that??" an exclamation of wonder, awe, and admiration. He was a wonder wolf-dog, that's what he was. He was the ultimate sweetie. He was aloof to affection, to some extent. I always wanted to cuddle with Homer more than he wanted to cuddle with me. I treasure the few occasions when he deigned that I could curl up against him. Homer ate sparingly from an endless font of food. He regarded the world with slight disregard, always content to stare in this direction or that. He never craved human affection, but accepted it graciously. Homer was the loyal co-pilot, the peaceable companion. And much more than that: he was an amenable soul to my brother, a true kindred spirit. I'll forever miss the genteel way in which he regarded the world around him. Homer saw a remarkable slice of the world, thanks to his true friend, my brother Chris. And Chris? He granted Homer that rarified quality of "equal." Four legs or two legs: it mattered not. Homer was what he was. Sage.

Homer: there was — nor will there ever be — any approaching your grace, charm, and demeanor. Thanks for what you offered the world, Homer Doggie Jeffries.

Posted by Mick Jeffries at 1:04 AM No comments: