A funny thing happened on the way to the Casbah

Man, do things get weird and weirder.

I'm in Florida, in case that hasn't been established. And the trail of hilarity, unexpectedness, good times, gratitude, sun, beach, and so forth just continues to pour forth. And some of it, is rather wacky. I cannot seem to relate fully the bizarre things that have happened here, so I'm going to focus on one for this post. Read on, gentle reader!

I swung by the Spirit workshops to make an official introduction to grease the wheels of one facet of my trip: taking pictures of belly dancers—only to be severly rebuffed. No pictures. No! None! Do not! Take! Pictures! Not now, not tonight, not tomorrow, not at all. Kinda hurt my feelings and I'm not totally over it; Trying to accept that it's got nothing to do with me, but I know how much smiles some of my belly dance pictures have brought dancers and I was lookng forward to that again, with an audience of several hundred avid dancers. Not to be it would seem.

I came back to the condo, and said, "At the beach, no problem here, right?" I got a gyro from the same place around the corner that I last night got some hummus and baba for the trip to boca raton the night before.

And then a funny thing happened.

Deciding to enjoy the privacy for a moment (no disrespect to last night's Venician mansion and its ultra-kind owners with 87 rooms, wi-fi, a mechanical butler, etc. More on that later.), and lay down on the couch. Bang, the phone rings; it's my trusty other-continent customer support dude calling on behalf of my bank to confirm that I'm in fact swiping my plastic all over southeastern florida. Which I am. And, honestly, I have to remember to be thankful for this no-charge service that my bank provides, even though it can be purturbing if I'm in the middle of something else, like an attempted nap. The funny thing is, when they call, they'll run down a list of charges: "Did you spent $6.73 at foodway? (yes) Did you spend $14.83 at cocktailsRus? (uh-huh) $2.46 at Nuttier Than All Other Nuts? (yup)

But the weird thing was this: two transactions to the mediterranean restaurant right around the corner. One being for the gyro I bought just 20 minutes ago. The other for the hummus from last night. And both amounts totally wrong. North of wrong. Double plus north of wrong. And that, my friends, is how I am currently involved in a credit card fraud case whilest simultaneously movin and groovin on the beach.

It's been rather fun I must say. The owner claims total innocence but in a kind of belligerent way that makes me thing either a) he is one guilty motherfucker or b) his people skills are seriously compromised. We've had at least a couple of smiling yet confrontational encounters since this happened. yes, some chest-puffing, yes, some finger wagging. I'm grateful that I've been able to do this without raising a fever, you know? And in a weird way, I'm taking my cues from the owner. but I think the sum-bitch is guilty. Last night, Mr. Mikey T was here and we were walking and I just couldn't help—couldn't help!—marching into old dude's restaurant and having about a ten minute chest-puffing session with the guy. It was quite exhillarating, I think, because the sums aren't really anything to lose sleep over (you're dying to know, aren't you? read on) But it's kind of cathartic to walk in, have this preposterous little debating session (him: "look here! see this number [pointing at my charge slip]? This is how much we charged you! If you were charged more, it's your bank's fault!" Me: "Well, that's very convenient for you, don't you think?" [ensuring laughter and head-shaking] And again, there's not really any blood boiling, but there's some finger-wagging (mostly me) and so forth.

And you know what else?
I probably wouldn't even be bothering with this if the guy hadn't said the first time I went down, "You call your bank, and when they figure it out, you will come back down here and apologize to me."

Oh. My. God. Did this guy really say that? He backed off of it real quick actually. I was completely slack-jawed over it. "Wow," I said. "You have an amazing amount of nerve! Me? Apologize to you!?" And this all said with a certain amount of incredulous laughter. I mean— even if the guy is completely vindicated, there is no excuse for his swagger, at least, not as a businessman who, you know, wants to sell food to people on a daily basis.

So the saga continues, but today, I look forward to a swim, some sitting around, maybe an argument or two with my neighborhood credit card swindler, you know—the normal stuff.

Headed Out! Spirit of the Tribes in FLA!

Wow, all of a sudden, I'm going to Florida!

"Excellent…" as Mr. Burns would say.

I'm delighted to report that I am honored to accompany my world-class bellydance pals Rakadu Gypsy Dance to Spirit of the Tribes 2007 in Ft. Lauderdale, thanks to the ceaseless proddings of sRi TaraSita. "Over 100 performers! Featuring Tribal belly dance groups and instructors from all over the country!" the press page sez! Including pals and Lex visitors Dalia Carella and Rachel Brice. Which is cool enough in and of itself. And let's not forget that Rakadu is basically the closing act for the entire event. Not too shabby, dahlinks!

As for me, I'll be acting as some sort of laptop adjunct musician slash entertainment consort slash cocktail consultant slash errand guy.

(Editor's note: Extra thanks goes out to Mick's ever-patient wife and love, Lucy, for putting up with such dalliances. [in other words: she said I could go])

No one belongs here more than you. Stories by Miranda July

If you are looking for an innovative and delightful design for your web site, it just doesn't get any better than this one by Miranda July, an author promoting her new book.

How incredibly cool.
Posted by Mick Jeffries at 3:17 PM 1 comment: 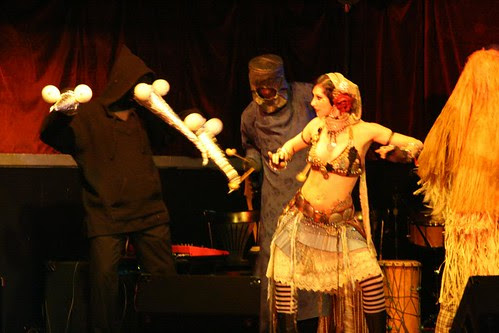 Oh friends, there's been much doings! While short on words, I've been thousanding them together in pictures, you know. I've been super happy with my new camera setup and have been putting it to some good use.

For instance, maybe you want to check out pix from Mecca's Dancing Lotus Lounge event, featuring the amazing Rachel Brice!

Posted by Mick Jeffries at 11:32 AM No comments:

Some good news on the Environment!

I know I've been a little un-bloggy lately, but I'm coming back, I swear. In the meantime, this is the best news I've heard in many a moon, concerning the worrisome state of the environment and the fuck-headed attitude taken by many "in charge" in our country. Check it out, read the story, it's a big deal.

Now, if somebody can only explain to me why this story was in Yahoo News' top RSS feeds for less than a day, before being replaced by important news about Justin Timberlake.
Posted by Mick Jeffries at 10:03 AM 1 comment: