Wow, The Beach Boys​' Brian Wilson​ finally lauded, cared for, and treasured in movie form. Love & Mercy​ is what some fans (ME) have been waiting for: a completely gripping testament to one pop music's greatest and most troubled geniuses. It's at the The Kentucky Theater​  through Tuesday only. REALLY REALLY GOOD, for anybody. For music nerds and Wilson fans — ok, again, ME, at least: totally mesmerizing. The detail, the references… the love and care, I guess. SO GLAD. I feel like, if you love Brian Wilson, you've patiently waited for somebody (including HIM) to "get it right." Love & Mercy gets it right.

I come home from Ukulele World Congress with a feeling of glow inside, such a remarkable thing it was. I haven't experienced that vivid strain of friendliness outside of Burning Man.

We camped. We won. This was a comeback, since Lucy and I tried camping, oh, about 9 years ago. (And that's how well it went: It was nine years ago.) Thanks to a village of loaners, we had the kind of fun we wanted to have camping or "glamping" as some like to say. For our family of 3, I took 4 air mattresses. We used three of them. (Couldn't afford to screw up the sleeping arrangements.)

It's okay to feel like you don't know how to camp if you're in the company of those with a zeal for it. That's always been my preference and this trip was a grateful return to that: Paul with his fried corn, his endless generosity, his impossibly friendly ease; Jonathan with his punch, his impish selection in songs — we're brothers in both ways; Tracey and that goat cheese, her stories — a more game girl there surely has never been; Plum and her boys and that tent — always funny somehow without saying a word, funny by gesture, by implication. Jeff, who traveled three hours to play "Hooked on a Feeling" and who is skyrocketing up through the ranks of Libby Lee's favorite play buddies.

We made new friends — real friends like Brenna — and lots of new acquaintances who will likely become real friends. We played in creeks. We didn't wear shoes. Libby Lee stayed up until 1am or later and then would simply knock off, without any kind of protest or storm. Just… Lights out. Seeing her joy at tromping around those adjacent grassy fields, leading the way, saying "let's find Harrison," or "let's go see the people playing ukuleles." I'm pretty sure she came back making up more songs than ever before. To arrange for her to see gifted players and singers — on stage or from one foot away — is essential fathering. Mission accomplished. If I can infect her with a love of music and the seed that she can play and sing, then mission fucking accomplished.

UWC was that incredible balance.

A celebratory passion for not just ukulele, but the playing of music by normal folks. Yes, there were mesmerizing singers, voices that reminded me that some people have awe-inspiring natural gifts that others of us will never have. But just as importantly, there was the spirit — the insistence — that you, too, can sing and play. We can ALL sing. And that I treasure probably more. I think now about the verb "to play" where music is concerned, and how I saw this weekend, that it means the same thing as it does when Libby Lee says "Do you want to play?" It's the same. And when I got on stage by myself or with my Lexingtones friends (and hopefully next year with friends who possibly I met minutes earlier — I'm already cooking up ideas. Watch out, Laura Lindahl and Jennifer Lane), we're playing — we're all playing. Including the audience. Ukuleles and voices and ears are just the mediums. We are, all of us, playing. It's kind of all I want in this world. It's the only thing that really feels right and isn't confusing or complicated.

FRIDAY: My first time on stage is with the UWC line-up of my home group, The Lexingtones. We play Culture Club's "Karma Chameleon" and "We're Gonna Be Friends" by the White Stripes. There's lots of harmony singing, which I think I enjoy even more than playing ukulele. Singing feels so good. It feels so physically good. And this line-up seems to do pretty well with improvised harmony. Or at least that's how I choose to hear it. The audience gives us hearty applause, at least because everybody gets hearty applause at UWC (and maybe because we're awesome). It's part of the culture and it feels good. Everybody should be applauded. We'd all feel better as humans, I think. (I went to something once where anybody could stand and ask for a round of applause. I can't remember the occasion, but it's a great idea.) Now we move forward several hours into the witching hour. Many go to bed. Not me.

Because, very late, I realize that I'm unexpectedly, serendipitously, deliriously the Main Stage CLOSING ACT at 2:30am. I feel wildly excited about this because I know that — despite having shaken some hands and met some people — I'm basically unknown here. And potential of this thrills the performer in me.

After an hour of strolling around alone, and strumming in the darkness, trying to choose the perfect songs, I think I've got it: First, a party song — Miley Cyrus's "We Can't Stop" and then a pretty song, Lou Reed's "Satellite of Love," because it's a beautiful starry night, and the full moon is rising above the trees. It's breathtakingly beautiful out here on this night.

After this reception, I know I have to toss out "Satellite." I don't have the enchanted pipes that some have here and right now they don't want "pretty," they want "party." So I go into Alicia Bridges' 70s hit "I Love The Nightlife (Disco 'Round)," and it slays. As I leave the stage, several UWC mainstays grab me, with playful incredulousness (and inebriation) and lovingly scream in my face:

"Who ARE you?!!!!"
Which was exactly the reception I was dreaming of.

That I was lucky enough to get to deliver this kind of shot to these people — many of my new and future friends, I have no doubt — fills me with a buzz of intense gratitude. I get hugs, backslaps, handshakes on the way to my camp to collapse in the tent, next to my slumbering wife and daughter, who I'm pretty sure have had a great day. They came here either having never camped (my daughter) or having had a not-so-great time in the distant past (Lucy).

Hard to top this for solo debut at UWC. Will FOREVER be a treasured memory. For the rest of the Congress, I've got new friends everywhere. I thought only a handful of people were in front of the stage, but over and over people grab me and say: "you were great last night! You're a natural entertainer." I cannot overstate how great this makes me feel. I try to say thank you and mean it every time anybody compliments me. It's good for the soul to say "thank you."

SATURDAY: The Lexingtones play The Ronettes' "Be My Baby," (my group arrangement, in which the participants have kindly allowed me to assign them parts and generally boss them through a couple of rehearsals) and "Hooked On A Feeling," the cultish 70s hit that gets a resurgence every so often, and to which Paul Curry (KY's real true ambassador to UWC, let's note) has loved and dedicated himself (and us) to. The big, all-ages early evening audience enjoys "Be My Baby" and SaraBeth belts it out like Ronnie. The rest of us try to keep up with harmony and backup vocals. Some people play my alternate voicings, and Jeff slaps out the percussion part on his ukulele (with his signature "flip move," expertly flipping the ukulele after each iteration of the percussion cadence. Love you, Jeff – I have this purist strain in me that loves the prospect of just ukuleles when arranging).

Then when we start "Hooked On A Feeling" with the signature chant of "Ooga-Cha-Ka! Ooga-Ooga!" people go bananas, and close in on the front of the stage so they can sing and dance along. When we're finished, they cheer — no less than cheer. Immediately after we play, it's time for the hilarious challenging-to-orchestrate group photo, and while adept photog Colin attempts to maneuver the happy hundreds into a camera frame, many in the group start spontaneously chanting "Ooga-Cha-Ka! Ooga-Ooga!" Looks like we played a hit.

And then, much later, I've got one more trick to pull out of the KY sleeve — and I cannot BELIEVE that I haven't been beaten to the punch on this. After rehearsing it in a variety of combinations and ultimately deciding it would be "overplayed" at UWC, we revive the intent to play "Shake It Off" which is a pop diamond as far as I'm concerned. On stage, I announce to the audience how ukulele has helped me "get in touch with my inner teenage girl, and how I've found at least two other middle-aged paunchy white guys who share this sentiment." Then Jonathan Piercy, Paul Curry and I take the stage as The Taylor Swifters (or The Taylor Swiffers. Or The Taylor Swiftests — I couldn't make up my mind) and blast through "Shake It Off," complete with an acapella singalong and, well, it slays. Why, here's a video of us!

The next day, I'm again praised around UWC for such inspired silliness, again told I'm a natural performer (and a tiny voice inside me whispers "no you're not" but I tell that voice to STFU). I'm even asked for a command performance of Shake It Off at a camp I happen to be bopping by. Libby Lee just sits down on the ground, and watches as more singing and dancing ensue and Matty Daniels jumps in to duet. Beautiful, delirious, delightful. I love it here.

I could go on. And on. Dozens of new friends and hundreds of inspirations later, I've found a new family wing. We'll leave it there, for now. ❤️🎸❤️🎸

Posted by Mick Jeffries at 1:29 PM No comments: 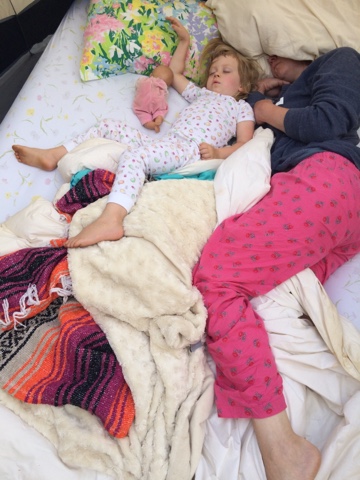 Posted by Mick Jeffries at 5:32 PM No comments: