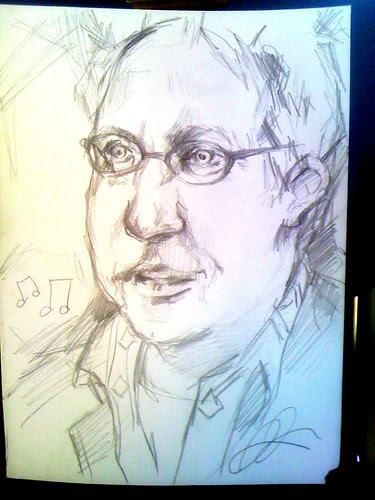 A popular thing at this last UK Reynolds Bldg Open Studio (always an
occasion of delight and charm, btw) was the $1 Portraits Room.

Maxine did mine, and when she realized that I was the WRFL Trivial
Thursdays guy, she added the musical notes (thanks for listening!).
Later, with genuine concern, Maxine slid the drawing to me and
pronounced: "This looks nothing like you… I'm sorry!"

I disagree. I think she captured curiosity and zeal, pouring out of my
eyes.

(Also? Maxine and a nearby classmate were so funny that I was grinning
the whole time. So it was extra-challenging.)

Posted by Mick Jeffries at 1:17 PM