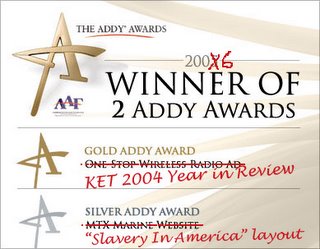 Congrats to my other KET peeps, who helped the agency take home a decent handful of awards. Also to Elevation Studios, who mopped up the place for a second year in a row.
Posted by Mick Jeffries at 6:09 PM