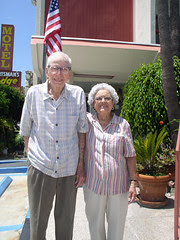 TT and I made a beeline for Shelter Island and found a run-down mecca of 60's and 70's drive-ups that have gradually become "Patel hotels" (thanks Loris) Grateful for the possible reprieve from a hard floor, we walked around, doing some room-visiting. Lots of vacancy, if you don't mind your hotels old and a little musty. The prices weren'te quite what I was hoping for, but at around $120/night, it was still beating the pants off of "no vacancy" or $185/night. We were really close to biting at a run-down Ramada; They had a two-queen room seemed ideal for our expected accomodation of three (Super Kate on the way from LA, to augment to belly dance contingent) but the manager was driving a typically hard Bombay bargain. "My boss, she has the final word," he pleads, with one ear to the phone, the alleged price-fixing boss on the other end. Negotiations broke down at $129 plus tax, and as TT and I walked away (part of the strategy, right?), these two—blast!—Indian gents—these…interlopers— appeared out of nowhere, wanting to see a room. I watched in minor horror as he showed them our room.

Damn!—surely that option was gone. But never mind—After a couple more lackluster inquiries, TT and hit the motherlode—a place that I first reacted to saying "I don't like it. It doesn't have enough windows." Indeed, one wall seemed windowless. But this turned out to be a magnificent misconception. Upon closer inspection, the place was swimming in scratch and dent So-Cal style: style: Pink trim, aqua doors, kidney swimming pool, partial stone walls like yr. uncle's den… 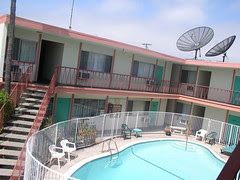 Let me just get right to the point: this place is a fucking treasure.

We popped into the front door and behind a thick glass, and even thicker glasses, we met Carlos, a retired fisherman, on the far side of 80, maybe. TT asked—with what was at this point understandable reluctance—if by any chance they had any rooms for rent. Carlos, smirking a little, and replied "No, no…we don't have any rooms…" as he reached for some keys. I knew we were in good hands immediately This old wise guy was already bustin' our balls.

The next thing he said, I don't think was a joke. With no small labor, he scanned down a piece of paper that he held in his monumentally arthritic hands, and sighed enormously through his stooped shoulders: "I've got a three-bed room. But it's expensive." He paused and looked at us with great remorse: "It's eighty-five dollars," he confessed gravely.

I stared at TT. TT stared at me. We tried to act natural. "We'll take it!" I screamed. Reaching under the security glass, I tried to grab Carlos and shake him forcibly, to make my point more clearly. Just then the Indian Iinterlopers—remember them?—walked in the door, and struck up a conversation with Dinora, Carlos' wife.

Then, I saw it: The Approaching Checkmate: "Now, it's okay for us to stay here tomorrow night, too?" I asked quickly. Dinora looked at me and her face lit up. She said: "Oh, you want to stay tomorrow night, too?" to us—and then to the Indian Interlopers—a sympathetic shrug: "I'm sorry!" They were polite, good sports, and hit the door, banished to whatever inferior dive would take their sorry asses, the losers.

And we were in like Flynn at The Sportsman.
Posted by Mick Jeffries at 4:44 PM